Y’know, it used to be that the only Angry Birds I ever knew was when I’d tread on their handbag dancing down Ritzy’s on a Saturday night. Although I’ll be honest, they were never that friendly even when I wasn’t stamping on their fake designer bag and I just tried talking to them.

But these days Angry Birds also equates to something else. Because with 300 million downloads on iPads, iPhones and other clever devices, there are a lot of people very familiar with an entirely different kind of Angry Birds, the game.

Me, I’m certainly well acquainted with it, because I’ve got an iPod Touch and for the 59p that I spent to download Angry Birds it is simultaneously the best value of anything I’ve ever purchased and positively the most costly, time robbing, counter-productive thing I ever, ever did. 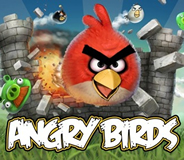 The hours I’ve enjoyed/wasted catapulting little birds at green pigs, wooden planks, glass panels and stone slabs I wouldn’t like to calculate but it is the epitome of a ‘one more go game’. Only usually I’m saying those words to myself over and over again and still been bloody playing.

In fact I’ve deliberately allowed my iPod battery to drain down to nothing so I couldn’t have one more go.

Only now I can’t even rely on that fail-safe because they’ve only gone and made a version for the browser as well. And viciously they’ve even made it totally free, the bastards.

That’s right, now anyone has access to Angry Birds, although for this new browser based version they’d like you to think it’s available in only one particular browser, that being Google Chrome. Actually it plays exactly the same in Firefox 4 and above, Safari and IE 9, it just has the Chrome branding all over it still.

Where the Chrome exclusivity does kick however is that you can download it as an Chrome app (the fancy name for add-on these days) and then you can play it offline as well.

You have to hand it to Google, if a multi-million pound promotional campaign isn’t enough for people to adopt Chrome, hooking them in with the gaming equivalent of Crack is a credible Plan B.

Not that they really need it, already embraced by 20% of computer users in the UK, Chrome is an excellent browser, secure, stable, with thousands of cool add-ons but most crucially, it is very fast.

If you don’t have it yet, perhaps you should, you can download Google Chrome here.

But what of Angry Birds itself, and its hours of fun/frustration. Well to play it directly in Google Chrome, or the other browsers I mentioned, all you need to do is to click this link – Angry Birds for Chrome.

You’ll soon get the hang of the controls, zoom in and out with your mouse scroll wheel, or the up and down arrows of your keyboard, and use your cursor to pull back on the catapult. Don’t worry it will all make sense when you’re there.

Oh and look out for the Chrome logo in later levels to aim at and unlock some extra Chrome inspired levels (you can still play them on any browser though). To download the offline app for Chrome, you’ll see the link featured prominently anyway.

Whatever method you choose, if you’ve been curious to play Angry Birds but not had the right gadget before, this is your chance. At least it’s something different to playing Solitaire when you should be working.

But if you do start playing it, may I just say two things.

Tell others about this: